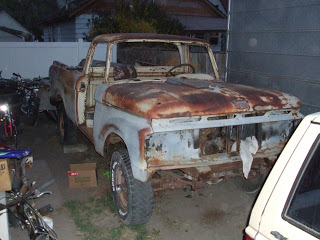 Who wants to hear the story behind this truck? Those who know me

are more than aware of how long this has been around. When Dave Mossburg and I got to Shiprock to pick it up I was a little disappointed with the rust. But inbetween the Jeeps I’m working on now, I have found some time to clean the old Ford up some more.

First off, don’t surprise yourself too much. This is a short wheel base styleside 1961 Ford unibody with the large wrap-around rear window. The tail gate has been rusting on the Navajo Rez behind my brother in law’s old place for longer than the truck sat at Buck’s in Shiprock. The 302 is from a 1970 full size Ford passenger car. I had it in a 1969 Ford Ranchwagon. That is another story.

About 25 years ago a friend gave me a bell housing from a 300 6 cylinder Ford used for his power plant for a lumber yard. It fits the frame and I already had motor mount stands for a 390 ( two in this truck) and a 352 my brother Bob put in it the very early 70’s.

I planned to do this ten years ago. It was going to be my 50th birthday present to myself. Now, back in my possession is not just the truck but, a new reason to look forward to 70. Although I cannot certify the mileage on this old Ford but after 7 engines ( 3 sixes, 2 390’s a 352 and the 302, I feel confident that the original 9 inch rear (3.70’s) had more than half a million miles on it when I put the 1960 9 inch (3.89) and 3.92 front in it. Until Colorado started using salt in the sand, this truck had hardly any rust. I’ve been at this off and on for the past month and all I can say is my yard will have plenty of iron after I’m finished with this.
But this is not the whole Ford story. I have photos of many old Fords and Mercurys I’ve owned and restored. We restored 3 Mustangs from the 65-66 stash of my friend Scott in Denver. I also restored a 72 Maverick plain jane 302 three-speed but my kids (I helped, too) blew the top of the radiator off on the Navajo Rez before the turn of the last century.

Right now I am waiting for cash for a radiator. It was gone when I picked the truck up last month. The seat, from a 62 unibody,

needs some help. But I’ve cleaned and primed about half of it now and when I get the carb back in shape I’ll fire it up so it can be moved.


So for all you Ford fans stay tuned. Somewhere in my collection of pictures I have another picture of this Ford before I removed that straight axle with the bad kingpins. It was parked between 2 Mercury station wagons (a 69 and a 70), my red 69 Ranchwagon, Fred’s 73 Montego, Bobby’s 62 Ranchero (later on a 4 X 4 itself on a 1968 Wagoneer chassis) and the dogs. We also made a 1960 Econoline into a 4-wheel drive and that was one of the coolest rides I’ve ever been in. We put a little 200 six-banger in it with leftovers from another Scout and a three speed ford transmission. Bobby also put a 1976 Chevy Vega camback wagon on a Scout frame with a 305 small block, turbo 400 with quadratrack transfer case and 4.88s front and rear. Top speed – 45 mph. But it would do it in a few feet.


I like my Fords and Mercurys and one in particular which I should not have traded but I had to have a 57 Chevy. I traded a 54 Merc Monterey with a 390 and a 3-speed for it. There is no comparison to the two. 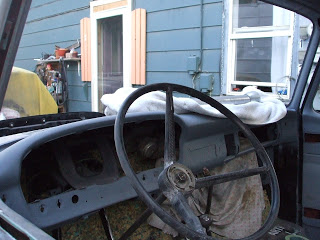 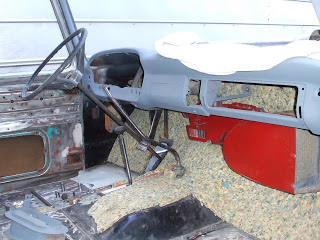 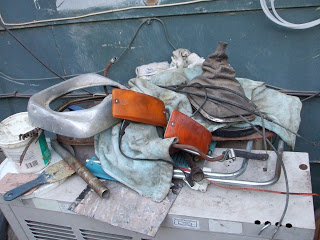 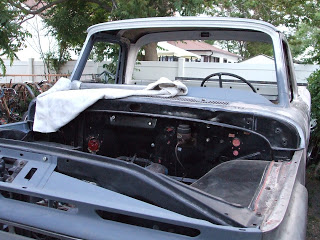 I found a picture of Bob’s first 58 SW with the 332. He raised a lot of hell on the streets of Denver with it.

Then he bought Becky Lynn, his wife, a used low miled 68 Torino GT with a 302 C-4 automatic and that last about a month so he put a 410 Merc with a hot Crane cam in it with the big Ford top load 4-speed. I turned a 13.18 with a blown right rear tire in it one afternoon east of Denver. So many stories from years past.


We stuck that cam into a 65 Merc 390 I gave my buddy Ed for his 59 Fairlane. The 292 he had was used up so we changed out the whole deal That car was dangerous. Keeping tires on it was one thing but the first time we started the headliner shook loose and my teeth fell out one at a time until I stopped racing everyone with it. Last I saw of the car was in Dick Wyatt’s storage lot on South Raritan under an old cottonwood tree. Had to have been when my boys were little. No hang on. Thomas was a baby. Mike came along the next year (1977).


Hard to believe if you look at the box of wiring that all the switches, wiring, lights, cigarette lighter and all fit into a small box. The tail lights are the only thing still left on the truck.


But it’s all fun for me. I am in my element again. Two years ago I swapped out a 1981 Thunderbird and my my 1981 Ford Fairmont a custom ride. It now has a 302 and AOD with split bench cloth interior, tilt wheel and Pink Floyd album cover on both sides.


So I believe I should rest a little this Memorial weekend and then make the Ford go again this next week. Enjoy the photos. More are ready for copy when I get some time.